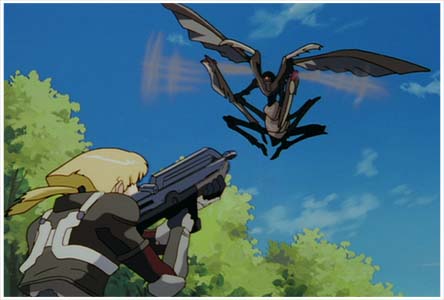 Kaidou Yuji had a rare disease so he chose to become a sleeper (cryogenically frozen) when he was a teenager. This was only to be for a few years, two years at the most. He wakes up many years later to find out the world is not the same as it was, when he went to sleep. The world has been taken over by creatures that are called BLUE. They are an evolving race that has completely taken over the planet. Yuji is saved from the Blue that attached the sleeping facility that he was at. The group, that saved him, mission is to take him back to Second Earth at any cost.

The remaining people are attacking these "BLUE" from Second Earth, a space station orbiting earth. Only 100,000 people were selected to go there, and they are fighting to re-take their home planet. What do they need sleepers for? What use are they to the people on second earth?

Back to Main Anime Page